Genetically engineered varieties of corn, cotton, and soybeans have plateaued at more than 90 percent of U.S. acreage planted with those crops 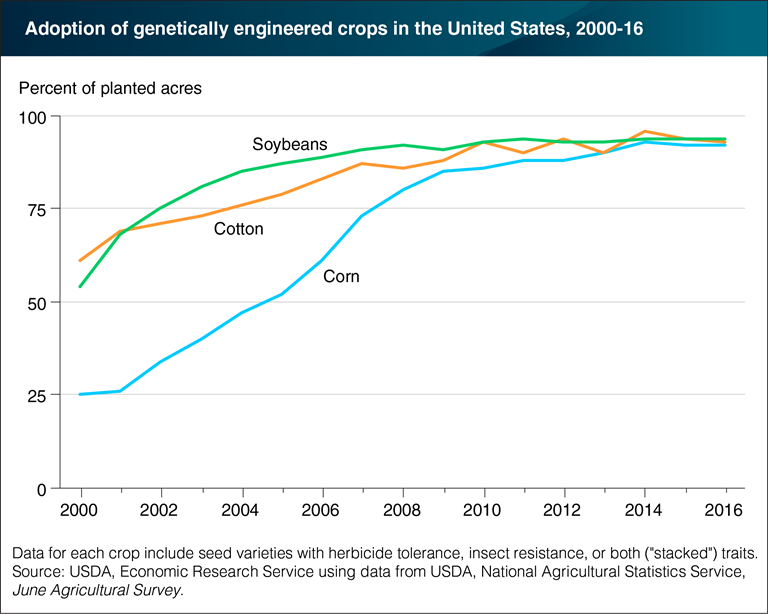 U.S. soybeans, cotton and corn farmers have nearly universally adopted genetically engineered (GE) seeds in recent years, despite their typically higher prices. Herbicide-tolerant (HT) crops, developed to survive the application of specific herbicides that previously would have destroyed the crop along with the targeted weeds, provide farmers with a broader variety of options for weed control. Insect-resistant crops (Bt) contain a gene from the soil bacterium Bacillus thuringiensis that produces a protein toxic to specific insects, protecting the plant over its entire life. “Stacked” seed varieties carry both HT and Bt traits, and now account for a large majority of GE corn and cotton seeds. In 2016, adoption of GE varieties, including those with herbicide tolerance, insect resistance, or stacked traits, accounted for 94 percent of soybean acreage (soybeans have only HT varieties), 93 percent of cotton acreage, and 92 percent of corn acreage planted in the United States. This chart is found in the ERS data product, Adoption of Genetically Engineered Crops in the U.S., updated July 2016.