U.S. production of fresh-market sweet cherries expected to be down this year 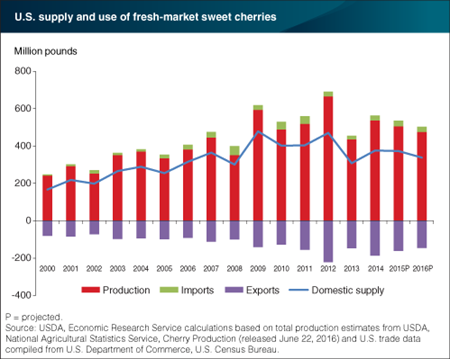 Warm weather prompted an early start to the harvest season for sweet cherries in the northwestern United States. Despite the early harvest, U.S. production is expected to be down 6 percent from last year and 11 percent below the 5-average, mostly reflecting smaller crops in the two largest producing states, Washington and California. In California, heavy rains in May reduced the quality and size of the crop, while in Washington a shortened bloom period limited pollination and untimely rains prior to harvest undermined the size of the crop. About 90 percent of sweet cherry production is sold in the fresh market, and most of the crop is consumed domestically. Between one-quarter and one-third of U.S. production is exported, and major markets include Canada, South Korea and Japan. The United States imports sweet cherries during the off-season (when domestic supplies are unavailable), but imports tend to account for less than 10 percent of domestic availability. Chile is the primary source for sweet cherry imports, with smaller volumes also supplied by Argentina, Australia and New Zealand. This chart is from the Fruit and Tree Nuts Outlook report, released June 30, 2016.