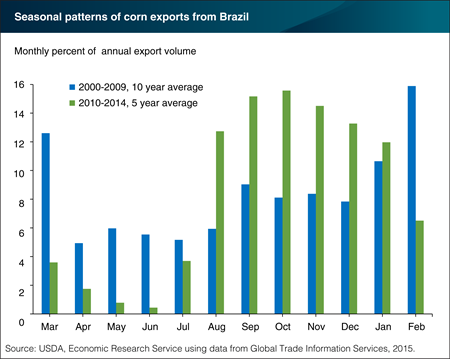 Corn is Brazil’s second largest crop (after soybeans), accounting for 20 percent of planted area, and Brazil is the world’s second largest corn exporter, behind the United States. Due to a favorable climate and long growing season, double-cropping is possible in much of the country, and the majority of corn in Brazil is harvested as a second crop planted after soybeans. Brazil tends to use most of its first-crop corn (harvested primarily during February-April) domestically because it is grown near the poultry and pork enterprises in the South, and the transportation system is focused on moving soybeans into global markets. But second-crop corn is harvested during June-August just as Brazil’s peak soybean export period ends, freeing up port capacity and transportation resources to move corn into export markets. Second-crop corn production in Brazil has expanded rapidly over the past 5 years, and over the same period the seasonal pattern of Brazil’s corn exports has shifted such that a much larger portion now enters export markets from August to January, months when harvesting begins and supplies peak in the United States. This chart is from the ERS report, Brazil’s Corn Industry and the Effect on the Seasonal Pattern of U.S. Corn Exports, released June 15, 2016.