Emerging markets account for most of the growth in U.S. agricultural exports 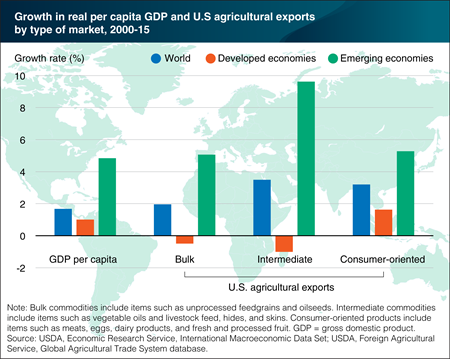 Growth in demand for food, and by extension for agricultural imports, is particularly sensitive to growth in per capita incomes in developing countries, where relatively large shares of rising incomes are typically spent on increasing both the amount and diversity of foods consumed. In contrast, consumers in more developed countries, where per capita incomes and food intake are already relatively high, are less likely to spend as much of new income on increasing the amount of food they eat. Emerging markets averaged higher rates of real per capita gross domestic product growth and accounted for all of the volume growth in U.S. exports of bulk and intermediate agricultural products and most of the growth in U.S. exports of consumer-oriented products during 2000-15. The volume of U.S. exports of bulk and intermediate agricultural goods to developed countries actually declined during the period, and U.S. exports of consumer-oriented goods to developed markets grew only about a third as fast as to emerging markets. This chart is from the ERS report, Global Macroeconomic Developments Drive Downturn in U.S. Agricultural Exports, released July 12.