Adulteration violations in imported foods increased the most for spices, flavors, salts, and seafood 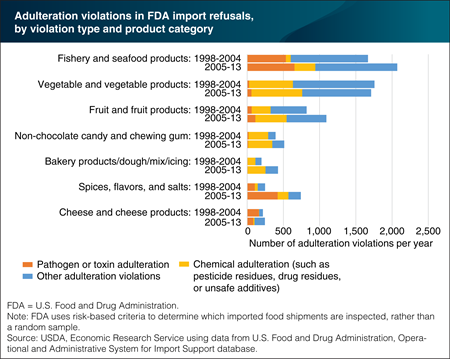 The U.S. Food and Drug Administration (FDA) oversees the safety of most food sold in the United States. Part of this oversight includes inspecting imported foods at the border or port of entry for evidence of adulteration or misbranding. FDA uses risk-based criteria to determine which shipments are inspected, rather than a random sample. A recent ERS study examined patterns in FDA import refusals over 2005-2013 and compared results with an earlier study of data from 1998-2004. Compared with the earlier period, spices, flavors, and salts, as well as fishery and seafood products, had the largest increases in the number of violations per year for adulteration—problems relating to safety issues, packaging integrity, or sanitation. In fishery and seafood products, the most common adulteration violations were for filth (visually apparent non-food material), the presence of Salmonella bacteria, and veterinary drug residues. In spices, flavors, and salts, the most common violation was for Salmonella. This chart is from “Patterns in FDA Imported Food Refusals Highlight Most Frequently Detected Problems” in ERS’s Amber Waves magazine, March 2016.