Corn production in Brazil is expanding 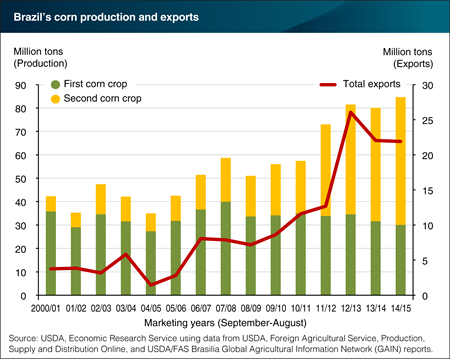 Since 2000/01, corn production in Brazil has doubled, reaching a record 85 million metric tons in 2014/15, equivalent to 8.4 percent of global corn production. Corn is now Brazil’s second largest crop (after soybeans), accounting for 20 percent of planted area, and Brazil is the world’s second largest corn exporter, behind the United States. Due to a favorable climate and long growing season, double-cropping is possible in much of the country, and the majority of corn in Brazil is harvested as a second crop planted after soybeans. Technological advances in soil management and improvements in hybrid corn varieties have supported this expansion. The second-crop corn harvest largely serves the export market, putting it in direct competition with the timing of the U.S. corn harvest. This chart is from the ERS report, Brazil’s Corn Industry and the Effect on the Seasonal Pattern of U.S. Corn Exports, released on June 15, 2016.