U.S. honey consumption per person has risen in recent years 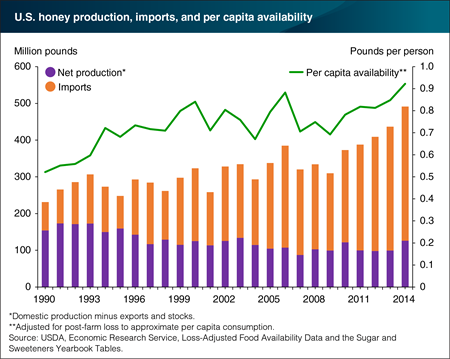 While Americans’ per capita consumption of all caloric sweeteners has been falling for the last decade and a half, per capita honey consumption has been on an upward trend. In 2014, Americans consumed an average of 0.9 pound of honey per person, according to ERS’s Loss-Adjusted Food Availability data, up from 0.5 pound in 1990. Much of the increased honey consumption is imported honey. Honey imports in 2014 totaled 365.3 million pounds, up from an average of 104.4 million pounds per year in the early 1990s. Domestic net production of honey (domestic production minus exports and stocks), once at an average of 167.9 million pounds in the early 1990s, has fallen to an average of 106.7 million pounds in the last 7 years, despite short-term increases in 2010 and 2014. Weakening colony strength from multiple honey bee health challenges and changes in land use patterns are among the factors contributing to declining domestic honey production. The data for this chart come from the Loss-Adjusted Food Availability data series in ERS's Food Availability (Per Capita) Data System and the Sugar and Sweeteners Yearbook Tables.