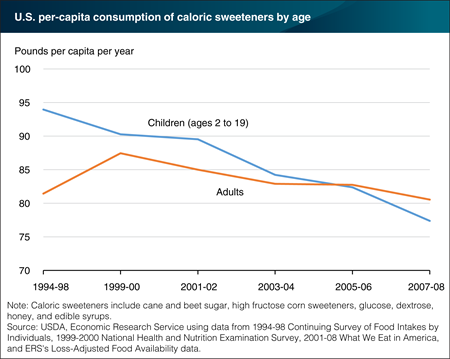 A recent linking of ERS’s loss-adjusted food availability data with intake surveys from 1994-2008 reveals that American children are doing a better job of cutting down on sugary beverages and other sweetened foods than adults are. In 1994-98, children ages 2 to 19 consumed 94.0 pounds per person per year of caloric sweeteners compared with 81.4 pounds consumed by adults. Over the next decade, per-capita consumption of caloric sweeteners by children fell to 77.4 pounds per year, while adults’ consumption rose before returning to 1994-98 levels. Caloric sweeteners include cane and beet sugar, high fructose corn sweeteners, glucose, dextrose, honey, and edible syrups—common ingredients in sweetened beverages, baked goods, spaghetti sauces, ketchups, and a host of other processed foods. Over 1994-2008, consumption of sweeteners declined across all income and race/ethnicity groups, with Hispanics and other races/ethnicities consuming less caloric sweeteners than non-Hispanic Whites and non-Hispanic Blacks. The data for this chart and similar information on 62 other food commodities can be found in the ERS report, U.S. Food Commodity Consumption Broken Down by Demographics, 1994-2008, March 2016.