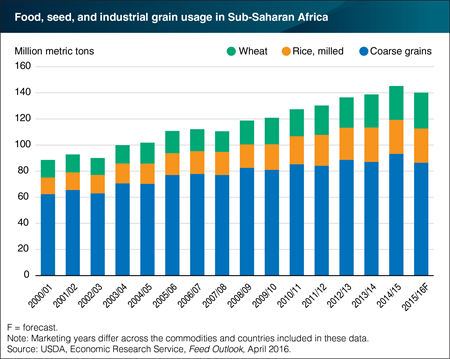 Across Sub-Saharan Africa, coarse grains, including corn, sorghum and millet, are a prominent part of the diet and are supplied mostly from domestic production. Wheat and rice play a smaller role and a significant portion of those grains are imported. In 2015/16, weather was influenced by a strong El Nino in the Pacific, and rainfall patterns shifted, leaving several major Sub-Saharan production areas in drought. Coarse grain production in the region in 2015/16 is estimated to be down about 14 percent from the previous year’s record output. Production was sharply reduced, especially in the populous countries of South Africa, Ethiopia, and Sudan. Wealthier countries such as South Africa can offset much of the production drop through reduced exports, increased imports, and drawing on stocks held over from the previous harvest. Ethiopia is expected to boost imports, especially wheat. The sharp drop in production in Sudan could be mostly reflected in reduced food consumption. This chart is from the April 2016 Feed Outlook report.