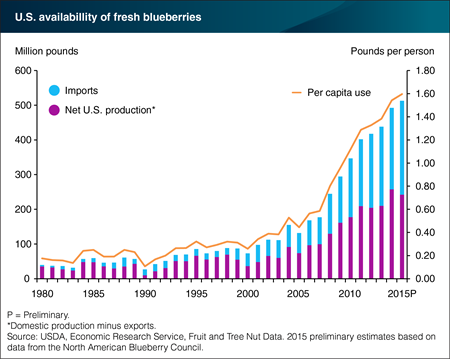 Demand for fresh blueberries in the United States has shown strong growth over the past decade, with consumption per capita more than tripling since 2005, to exceed 1.5 pounds per person. This demand has been met with supplies from both domestic and imported sources, with net U.S. production (production minus export) up by 223 percent and imports up by nearly 370 percent since the average from 2003 to 2005. Most blueberry imports are off-season supplies from the Southern Hemisphere that do not compete directly with U.S. production. Imports from Chile typically start in the fall and peak during January and February. Imports from Argentina, Uruguay and Peru follow a similar pattern but with much smaller volumes. Domestic supplies from Florida typically begin to come onto the market in March, with production moving northward and peaking during the summer months. Imports from Canada coincide with the summer U.S. harvest. This year, cold weather is delaying the harvest in both Florida and Georgia, causing tight early-season supplies. This chart is from the March 2016 Fruit and Tree Nuts Outlook report.