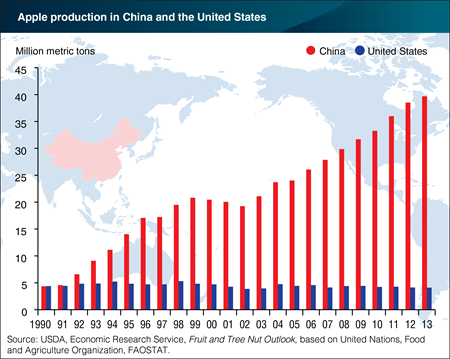 Apples are produced commercially in more than 90 countries worldwide, with annual combined global production of about 80 million metric tons. China is the world’s largest producer, accounting for nearly half of the global output and producing nearly 10 times the volume of the United States, which produces the world’s second largest apple crop. China’s large production volume is supported by the country’s vast production area. However, U.S. yields are nearly double the average achieved in China. Area expansion in China has slowed over the past decade but per-hectare yields have improved, aiding the country’s production to continue to climb. This chart is from the Fruit and Tree Nut Outlook, March 2016.