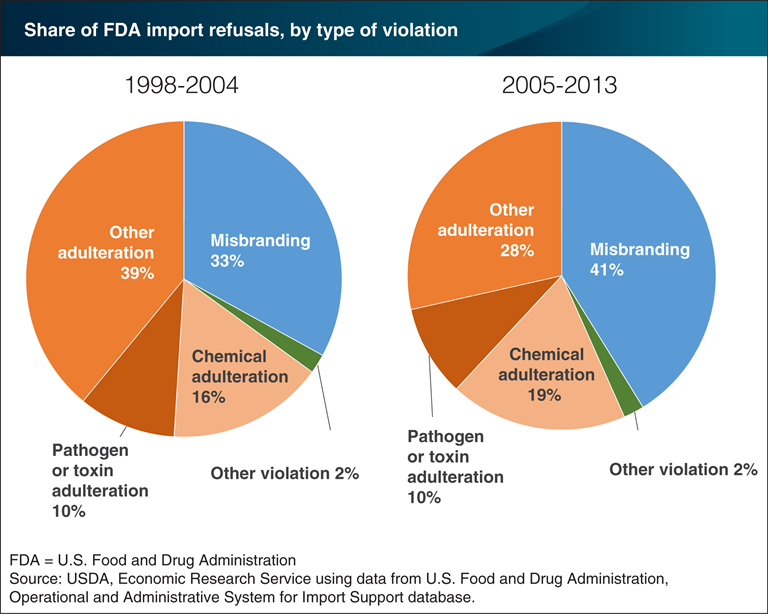 The U.S. Food and Drug Administration (FDA) is responsible for overseeing the safety of most food sold in the United States, including food imported from other countries. A recent ERS study examined patterns in FDA import refusals over 2005-13 and compared results with an earlier study of data from 1998-2004. In both time periods, the majority of violations were for adulteration—problems relating to poisonous ingredients, disease-causing bacteria and viruses (pathogens), unsafe color additives, pesticide residues, or filth (visually apparent non-food material). Two product groups—fishery/seafood products and spices/flavors/salts—were responsible for the majority of violations for Salmonella bacteria. Chemical adulteration, including pesticide residues, accounted for a slightly larger share of import refusals in 2005-13. Chemical adulteration is a common type of adulteration violation in fresh produce and fruit and vegetable products. Misbranding violations for false, misleading, or missing labels accounted for 41 percent of violations in 2005-13, up from 33 percent in 1998-2004. The data for this chart come from the ERS report, FDA Refusals of Imported Food Products by Country and Category, 2005–2013, released on March 28, 2016.