When it comes to fruits and vegetables, fresh is not always cheaper than canned or frozen 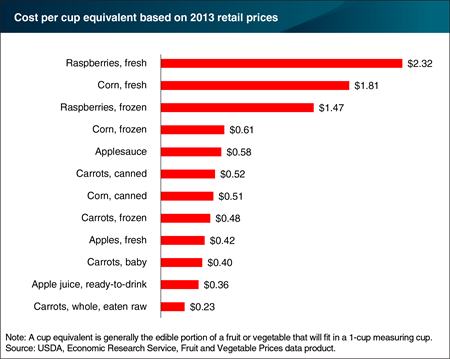 Fruits and vegetables can be purchased in fresh, canned, dried, and juiced forms. Oftentimes, different forms of the same fruit or vegetable are interchangeable. For example, when cooking some types of stew, fresh or frozen carrots may be used. However, which is less expensive, fresh or processed? ERS researchers estimated average prices paid in 2013 for 24 fresh fruits, 40 fresh vegetables, and 92 processed fruits and vegetables, measured in cup equivalents. A cup equivalent is the edible portion that will generally fit in a standard 1-cup measuring cup; for lettuce and other raw leafy vegetables, a cup equivalent is 2 cups, and for raisins and other dried fruits, one-half cup. Neither fresh nor processed products turned out to be consistently less expensive. Fresh carrots eaten raw are less expensive to consume than canned carrots and frozen carrots. Fresh apples are similarly cheaper than applesauce. However, canned corn and frozen raspberries are less costly than fresh corn and fresh raspberries, respectively. Relative retail prices may reflect the different prices received by growers, as well as differences in processing, handling, and spoilage costs, which vary by form and product. This chart appears in “Fruit and Vegetable Recommendations Can Be Met for $2.10 to $2.60 per Day” in ERS’s Amber Waves magazine, March 2016.