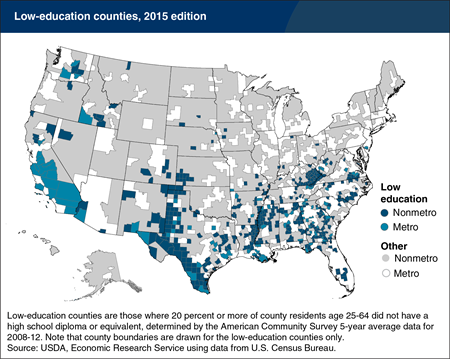 The proportion of adults lacking a high school diploma or equivalent declined in rural America (defined here as nonmetro counties), from 32 percent in 1990 to 15 percent in 2014. The proportion of rural adults with college degrees also increased from 12 to 19 percent during that time. Despite these overall gains, educational attainment varies widely across rural areas. ERS’s latest county typology classifies low-education counties as those where at least one of every five working-age adults (age 25-64) has not completed high school. In an average of data over 2008-12, ERS identified 467 low-education counties in the United States, 367 of which were rural. Eight out of 10 of all low-education counties are located in the South. Three-fourths of rural low-education counties also qualified as low-employment in the latest ERS county typology. Over 40 percent of rural low-education counties were both low-employment and persistently poor, reflecting the difficulty that adults without high school diplomas have in finding and retaining jobs that pay enough to place them above the poverty line. This map is part of the ERS data product on County Typology Codes, released December 2015.