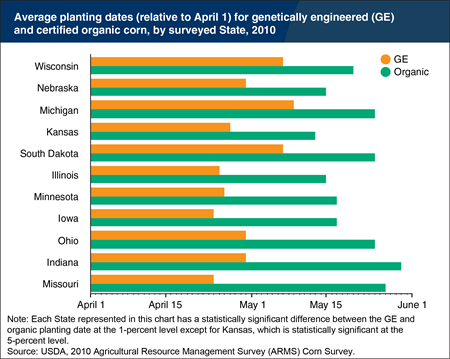 U.S. farmers used genetically engineered (GE) seed varieties that contain traits to tolerate herbicides used for weed control and/or to resist other pests on over 90 percent of corn acreage in 2015. To receive the price premiums associated with organic and other non-GE crops, these producers must minimize the unintended presence of GE materials in their crops. Organic and other non-GE farmers use various practices—including the use of buffer strips to minimize pesticide/pollen drift and/or delaying crop planting until after any nearby GE crops are planted—to prevent their crops from commingling with GE crops. While some field crops are mostly self-pollinating, most corn pollination results from pollen dispersal by wind and gravity. In USDA’s most recent (2010) corn survey of conventional and organic producers in top corn producing States, delayed planting was reported on two-thirds of planted organic corn acreage. While this strategy helps protect against commingling of GE and non-GE crop pollen, growers may realize lower yields from planting at a suboptimal time. This chart is found in the ERS report, Economic Issues in the Coexistence of Organic, Genetically Engineered (GE), and Non-GE Crops, February 2016.