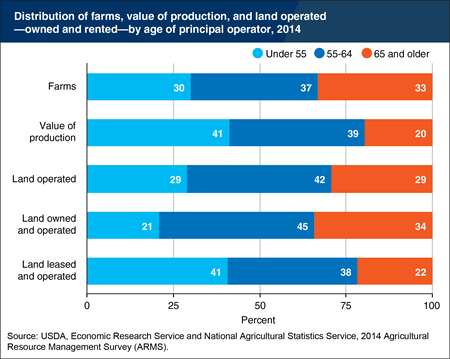 The average age of principal operators in the latest Census of Agriculture (2012) was 58 and has been greater than 50 since the 1959 Census. That farmers are older, on average, than other self-employed workers is understandable, given that the farm is the home for most farmers, and they can gradually phase out of farming over a decade or more. While older (age 65+) farmers make up a third of all farm operators, they account for a much smaller share (20 percent) of production. Nevertheless, older farmers still operate on 29 percent of all U.S. farmland (on land owned or leased, slightly less than their share of all farms). The largest portion of owned farmland is held by producers age 55-64; operators over 55 tend to own the land they farm, while younger operators are more likely to lease it. Older farmers’ land will shift to existing or new farms—or go into nonagricultural uses—as they exit agriculture. This chart is based on the information found in the Farm Structure and Organization topic page.