U.S. production and use of high-fructose corn syrup is declining 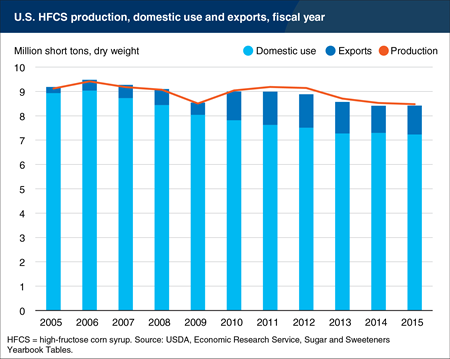 Domestic use of high-fructose corn syrup (HFCS) declined 0.8 percent in the 2014/15 fiscal year (October 1-September 30) to 7.2 million short tons, continuing a decade-long decline. Since 2004/05, domestic use has fallen by 19.1 percent, and it is down 21.8 percent since its peak in 2001/01. Production is trending lower as well, but by a smaller magnitude: 2014/15 production was 7.1 percent below 2004/05 levels and down 10.6 percent from its peak in 1999/2000. Several factors have contributed to this decline, including high corn prices, price competition with refined sugar and other caloric sweeteners, and changing preferences of consumers and food manufacturers. As domestic deliveries have fallen, HFCS exports have become an increasingly important segment of the market. In particular, exports to Mexico increased substantially beginning in 2009/10, shortly after the integration of U.S. and Mexican sweetener markets under NAFTA. This chart is based on the January 2016 Sugar and Sweeteners Outlook.