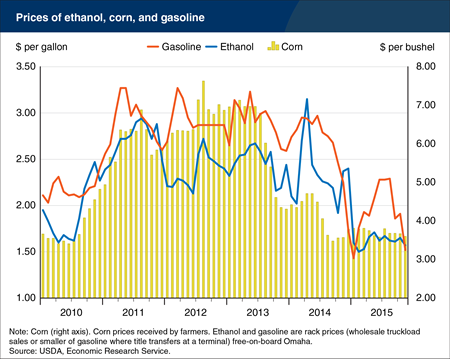 Errata: On January 26, 2016, this chart was reposted to correct the data labels for ethanol and gasoline, which were switched in the original chart.Each gallon of automobile gasoline typically contains about 10-percent ethanol, reflecting a mandate under the Renewable Fuels Standard that specifies the volume of ethanol that must be blended into the Nation’s gasoline supply. The steep decline in crude oil prices over the past 18 months has pushed the price of many conventional fuels down by more than 50 percent, including gasoline, which has fallen to price levels not seen since 2007. The price of ethanol has also fallen, driven primarily by the more than 50-percent decline in the price of corn—the primary ethanol feedstock—since summer 2013. Although ethanol is not derived from crude oil, its price is still influenced by the price of gasoline (as well as the price of corn) since ethanol and gasoline can substitute as an energy source, and as an oxygenate or octane booster, ethanol competes against petroleum-based alternatives. The price of ethanol is usually below the price of gasoline because of ethanol’s lower energy content, but the most recent data show wholesale gasoline prices falling slightly below the price of ethanol. This pattern, if it continues, suggests further downward pressure on ethanol prices. This chart is from the USDA/ERS U.S. Bioenergy Statistics data set.