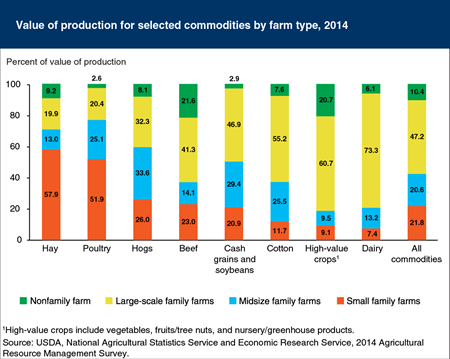 In 2014, 99 percent of U.S. farms were family farms, where the principal operator and his or her relatives owned the majority of the business. Most of U.S. farm production—68 percent—occurred on the 9 percent of farms classified as midsize or large-scale family farms having at least $350,000 in annual gross cash farm income (GCFI). Those farms together accounted for most production of dairy (87 percent of production), cotton (81 percent), and cash grains/soybeans (76 percent). Large-scale family farms alone (those with annual GCFI of $1 million or more) produced 73 percent of dairy output in 2014. Although small family farms (with less than $350,000 annual GCFI) accounted for 90 percent of U.S. farms, they contributed just 22 percent to U.S. farm production. Among some commodity specializations, though, small family farms account for a much higher share of production, accounting for over half of poultry output (mostly under production contracts) and hay. Non-family farms accounted for 10.4 percent of all production, but were most prominent in high-value crops and beef (through operating feedlots). This chart is found in America’s Diverse Family Farms: 2015 Edition, released in December 2015.