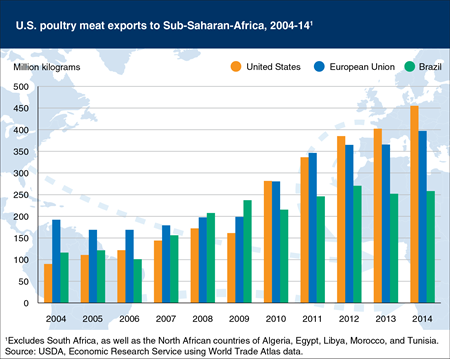 Over the past decade, Africa has emerged to become an important market for U.S. poultry exports. Rising incomes, population growth and urbanization support strong demand for poultry across much of Africa, while limitations in domestic production have led to a heavy reliance on imports from the United States, the European Union, and Brazil. For the United States, the overwhelming share (93 percent) of poultry exports to Africa are sent to Sub-Saharan Africa. Since 2012, the United States has been the leading supplier of poultry to this region, followed by the European Union and Brazil. Africa’s share of U.S. poultry exports grew to 12.6 percent in 2014, making it the second largest destination after Mexico (23.8 percent) and ahead of Hong Kong (8.6 percent), China (5.8 percent) and Canada (3.7 percent). U.S. exports to Sub-Saharan Africa reached 455 million kilograms in 2014 (compared to 487 million kilograms to all of Africa), valued at $523.6 million. This chart is from the December 2015 Livestock Dairy and Poultry Outlook report.