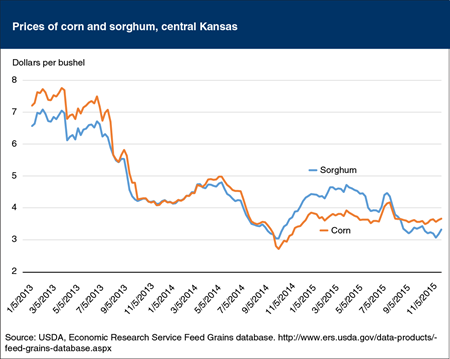 Sorghum is a common feed grain that can substitute for corn in livestock feed rations and in the production of ethanol. Corn tends to be preferred over sorghum as a feed ingredient, so sorghum typically sells at a discount compared to corn in global markets. Throughout much of the 2014 marketing year (September-August) this situation reversed, and due in large part to strong demand from China, sorghum began selling at a premium over corn, at times exceeding 20 percent. As a result, sorghum use for ethanol production declined while acreage for the 2015 harvest increased to result in a record-large U.S. crop. This, combined with recent changes in China’s import policy that could reduce U.S. sorghum’s export prospects for the 2015 crop, has greatly increased the availability of sorghum in domestic markets for feeding and ethanol production. Because of the greater availability of sorghum, the price fell back below the price of corn and is now more in line with historic relationships. Given these lower prices, sorghum use for ethanol production is expected to expand more than fivefold this year, and U.S. shipments to Mexico, which were hampered by the high prices for the 2014 crop, are expected to at least partially resume during the current marketing year, which began in September 2015. This chart is based on the October 2015 Feed Outlook and the ERS Feed Grains database.