Small family farms operate nearly half of U.S. farmland; account for 22 percent of the value of production 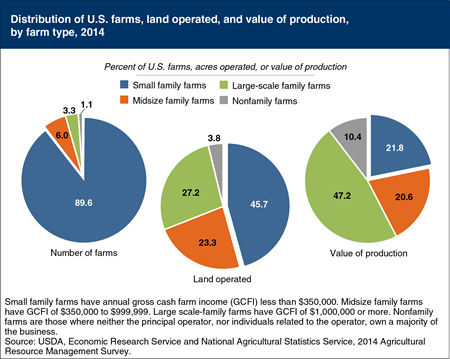 In 2014, 99 percent of U.S. farms were family farms, where the principal operator and his or her relatives owned the majority of the business. Most were small family farms, having less than $350,000 in annual gross cash farm income (GCFI)—which includes commodity cash receipts, other farm-related income (such as receipts from custom work or production contract fees), and government payments. In 2014, these small family farms accounted for 90 percent of all U.S. farms, 46 percent of the land operated by farms, and 22 percent of agricultural production. Large-scale family farms—with $1 million or more in annual GCFI—accounted for about 3 percent of all farms, but had a disproportionately large share of the value of production (47 percent). This chart is found in America’s Diverse Family Farms: 2015 Edition, released December 2015.