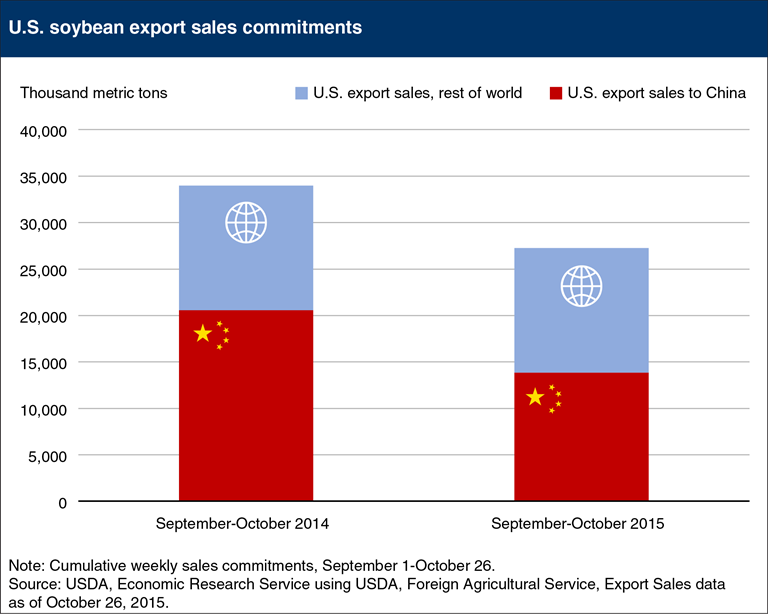 Despite abundant supplies, U.S. soybean exports for the current marketing year (September/August) are forecast down from last year, due largely to greater competition from Brazil. Soybean production in Brazil is forecast to reach a record 100 million metric tons this year. Historically, U.S. soybean exports peak between September and December, while Brazil’s export season peaks between March and June. Brazil’s record production in 2015 is extending exports later into the calendar year, putting them into direct competition with U.S. exports. The result has been a decline in U.S. soybean export sales commitments for the current marketing year, which were down nearly 20 percent through October 2015, compared to the previous year. U.S. export sales commitments to China, the world’s largest soybean importer, were down 33 percent over the same period, while sales commitments to the rest of the world are nearly unchanged from last year. Export sales commitments are sales transactions reported by U.S. exporters, including transactions for future shipments, whereas export data only reports shipments that have already occurred. Hence, sales commitments are useful for forecasting U.S. export volumes. With a large domestic crop and decreased export sales, U.S. ending stocks are expected to grow. This chart is based on the November 2015 Oil Crops Outlook.