U.S. pumpkin production and use are growing 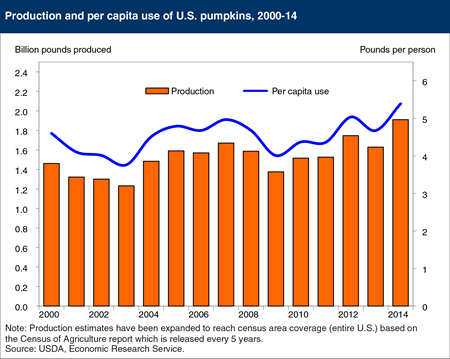 Over the past 15 years, U.S. production of pumpkins for all uses (jack-o-lanterns, fresh and processed food, seed, and other) rose 31 percent, from 1.46 billion pounds in 2000 to 1.91 billion pounds in 2014. The popularity of urban pumpkin patches, fall festivals, ornamental use of pumpkins, and seasonal cuisine have contributed to growing demand for pumpkins in the last two decades. On a per-capita basis, pumpkin use—for both food and ornamental uses—increased 17 percent during this period (adjusted for feed use, shrinkage, and marketing loss) from 4.6 pounds in 2000 to 5.39 pounds in 2014. The ornamental jack-o-lantern has long been the most popular use of pumpkins, but pumpkins are also found in a wide array of food items and beverages, including pumpkin pie, bread, muffins, soup, spice-flavored treats, and seasonal beers. This chart is based on information provided in 2015 Vegetables and Pulses Yearbook.