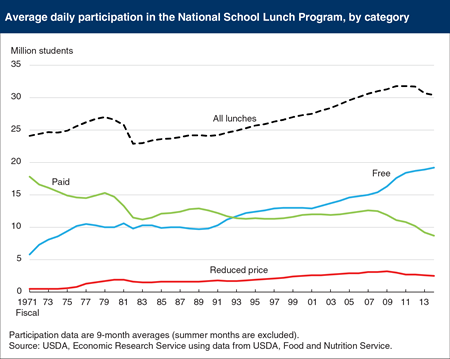 In fiscal 2014, 30 million children participated in USDA’s National School Lunch Program on an average school day, down from a peak of 32 million in 2011. The decline since 2011 reflects a drop in students taking full-price, or “paid,” lunch that began in 2008. A sharp increase in students taking free lunch during 2008-11 as a result of the 2007-09 recession made up for the drop in students taking paid lunch. During 2011-14, students taking free lunch grew more slowly, while students taking paid lunch continued to fall at roughly the same pace. Participation also fell in the early 1980s in response to tightened access to free lunches, reduction in USDA reimbursements to schools, increases in prices for paid lunch, and the 1980-82 recession. This chart appears in “A Look at What’s Driving Lower Purchases of School Lunches” in the October 2015 issue of ERS’s Amber Waves magazine.