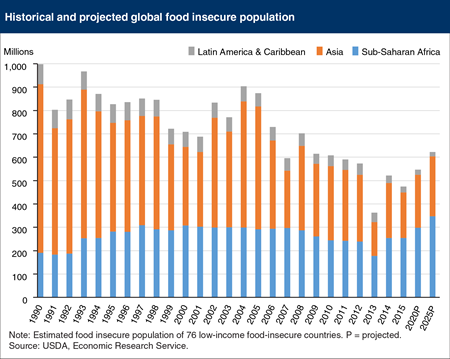 Friday October 16 is World Food Day, which offers an opportunity to highlight global poverty and hunger concerns. USDA’s annual International Food Needs Assessment, covering 76 low- and middle-income food-insecure countries, has indicated a long-term decline in the population that is food insecure, based on the nutritional target of 2,100 calories per person per day. While the food-insecure population has declined substantially in Asia and Latin America and the Caribbean, in Sub-Saharan Africa (SSA) it has remained high and is projected to rise. Factors that have contributed to declines in the food-insecure population share include gains in domestic production of food staples, slowing population growth rates, and increased food imports due to higher export earnings and lower prices for imported food. Although food security is projected to be stable or improve in most SSA countries through 2025, it is projected to deteriorate in a number of countries, particularly those coping with prolonged civil strife. For additional information, see International Food Security Assessment, 2015-2025.