A majority of U.S. land in farms is operator owned 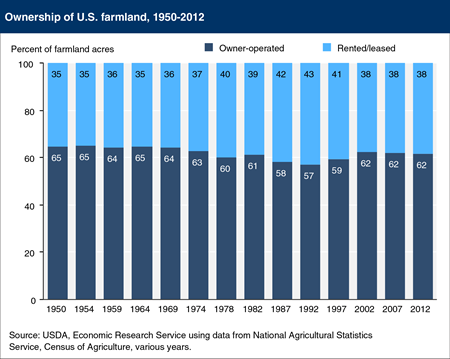 Because land is a critical input to farming and farm real estate represents such a large portion of the value of farm sector assets (around 80 percent), the ownership of agricultural land is a topic of interest to farmers, lenders, policymakers and others concerned with the farm sector. Issues surrounding production practices and conservation, farm credit, land values, farm succession, land use, and farm structure, all require an understanding of land ownership and tenure. A majority of U.S. land in farms (62 percent) is operator-owned, according to the 2012 Census of Agriculture. The balance of farmland is rented, and the portion of rented land in farms has ranged from 35 percent to 43 percent over the 1950-2012 time period. Some farmland is rented from other farm operations—nationally about 8 percent of all land in farms in 2012. The majority of rented land in farms is rented from nonoperating landlords. In 2012, 30 percent of all land in farms was rented from someone other than a farm operator. This chart is found on the ERS topic page, Land Use, Land Value & Tenure.