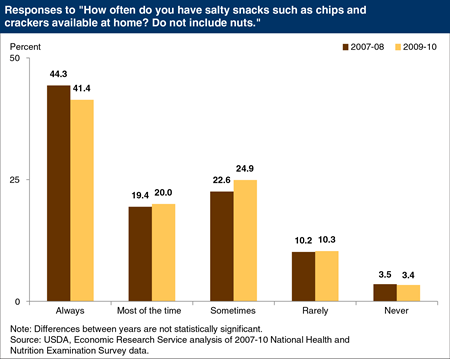 A series of questions in the National Health and Nutrition Examination Survey (NHANES) asks respondents aged 16 years and older how often different types of food are kept in their homes, in order to get an idea of the at-home food environment in the United States. In 2007-08 and 2009-10, respondents were asked how often they had salty snacks such as chips and crackers at home, and in both surveys, the most common response was “always,” followed by “sometimes,” “most of the time,” “rarely,” and “never.” Between the two surveys, there was no statistically significant change in the proportion of Americans falling into each category, meaning that the habit of keeping or not keeping salty snacks in the home was unchanged for the population as a whole during this time period. This chart appears in “National Surveys Reveal Modest Improvement in the Types of Foods Available in Americans’ Homes” in the April 2015 issue of ERS’s Amber Waves magazine.