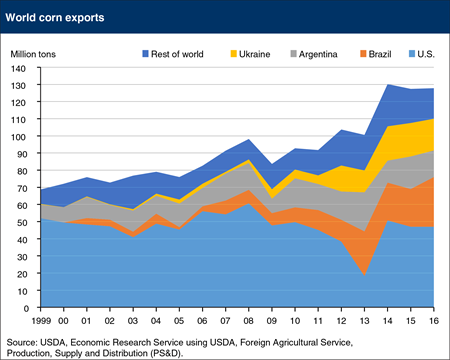 Over the last 5 years, the role of Brazil and Ukraine as suppliers of global corn markets has expanded rapidly, and in 2013/14 Brazil and Ukraine became the largest corn exporters after the United States. For both countries, technical developments over the last decade, coupled with a period of relatively strong world corn prices, supported a rapid increase in area dedicated to corn. In Brazil, shorter-maturing varieties allowed corn to increasingly be grown as a second crop after soybeans, instead of as a main crop in competition with soybeans. In Ukraine, corn production expanded and shifted northward, again aided by shorter-season high-yielding varieties. While global corn prices have fallen over the past few years, the exchange rate for Brazil and Ukraine has also devalued, offsetting much of the price decline. This chart is from the September 2015 Feed Outlook report.