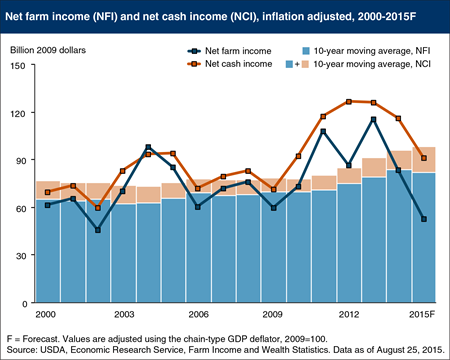 Net farm income and net cash income are two key measures of farm sector profitability. Following several years of high income, both have trended downward since peaking in 2013. ERS forecasts that both net cash and net farm income for 2015 will be below their 10-year moving averages in inflation-adjusted terms for the first time since 2009. Before falling in 2014 and 2015, both income measures had largely trended upward since 2009. Over the 2010 to 2013 period, surging crop, animal, and animal product cash receipts outpaced the growth in production expenses, leading net cash and net farm incomes (and their 10-year moving averages) higher. However, commodity receipts are forecast to fall sharply in 2015. Production expenses are also forecast to contract in 2015 after several years of growth, but not enough to offset the decline in commodity receipts. This chart is based on data found in Farm Income and Wealth Statistics, updated August 25, 2015.