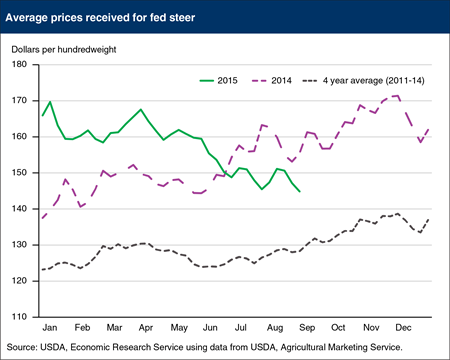 Although 2015 fed steer supplies remain historically small, prices have recently fallen from the record high levels reached during the first and second quarters of 2015. Prices have been trending lower since April 2015, and in July and August fell below the levels of the same time a year ago. The recent decline in fed steer prices is driven by negative margins faced by packers during the summer months. As a result, slaughter data suggests packers may have slowed the pace of slaughter to improve their margins, subsequently driving fed steer prices lower. A continued reluctance of packers to expand their slaughter could put further downward pressure on the price of these cattle in the months ahead, especially if it creates a backlog of fed steer supplies into the fourth quarter, when demand typically shifts away from grilling items to traditional holiday items such as turkeys and hams, easing wholesale beef prices. This chart is from the September 2015 Livestock, Dairy, and Poultry report.