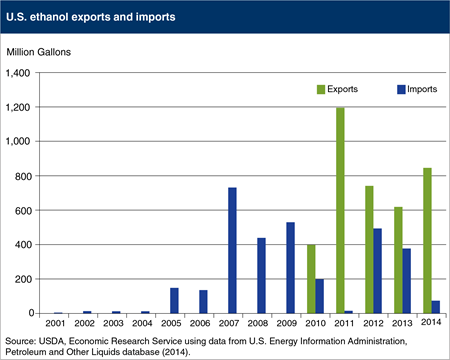 Between 2001 and 2014, global biofuel production and use grew rapidly, driven by a combination of rising gasoline prices, falling prices of biofuel inputs, and policies mandating use of renewable fuels. These same factors also led to an expansion of global trade in biofuels. The United States is the world’s largest producer and consumer of ethanol, and prior to 2010 relied partly on imports to meet domestic demand. But beginning in 2010, the United States emerged as a net exporter of ethanol, reflecting the “blend wall” that limits the ethanol content of gasoline used in most conventional vehicles to 10-percent ethanol, while demand for biofuels from other countries, particularly the EU and Brazil, continued to grow. The United States has remained a net exporter of ethanol each year since 2010, and since 2011 has been the world’s largest exporter of ethanol. In 2014, oil prices declined by more than half, pressuring U.S. ethanol consumption; however, the market remained strong due to U.S. government policies mandating ethanol use, the use of ethanol as an octane enhancer, and a large export market. This chart is from Biofuel Use in International Markets: The Importance of Trade, EIB-144, September 2015.