In Bangladesh, food security status is not the same for all household members 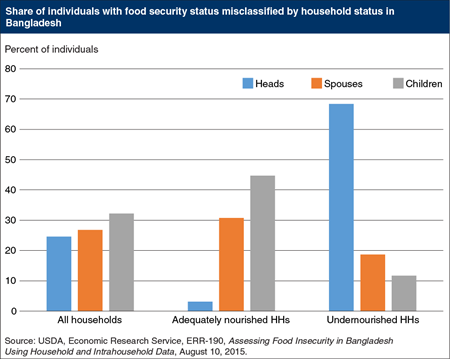 Estimates of food-insecure populations are usually based on data aggregated at the household level, with the assumption that calories are distributed equitably within each household. However, recent ERS research on Bangladesh found that the food security status of a large share of the population is misclassified because calories are not distributed equitably across household members. Two patterns stand out. First, in households classified as well nourished, about 45 percent of the children in those households were actually undernourished. Second, in households classified as undernourished, about 68 percent of household heads—primarily men—are actually well nourished. In those undernourished households, it is primarily the spouses and children that are undernourished. This research shows that food is not always distributed equitably within families, and that the depth of undernourishment for some individuals may be greater than traditional household surveys would suggest. This chart is based on the report Using Household and Intrahousehold Data To Assess Food Insecurity: Evidence from Bangladesh, ERR-190.