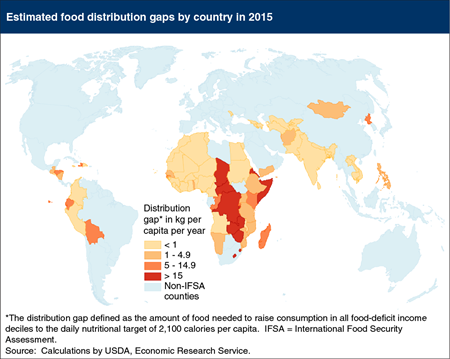 Sub-Saharan Africa (SSA) will remain the most food-insecure region in the world in 2015, according to the USDA International Food Security Assessment: 2015-2025. The 39 SSA countries included in the study account for about 25 percent of the population of the 76 countries covered, but more than half of the global population estimated to be food insecure in 2015. The intensity of food insecurity in the region is highlighted by the fact that it accounts for roughly 90 percent of the distribution gap—the estimated amount of food needed to raise food consumption in all income groups to the nutritional target of 2,100 calories per day—in 2015. There is, however, wide variation in levels of food security within SSA. In 20 of the 39 countries, 80 percent or more of the population is estimated to be food secure in 2015. On the other hand, there are 9 countries where 90 percent or more of the population is estimated to be food insecure: the Central African Republic, the Democratic Republic of Congo, Burundi, Eritrea, Somalia, Lesotho, Swaziland, Zimbabwe, and Chad. Find this chart and additional information in International Food Security Assessment: 2015-2025.