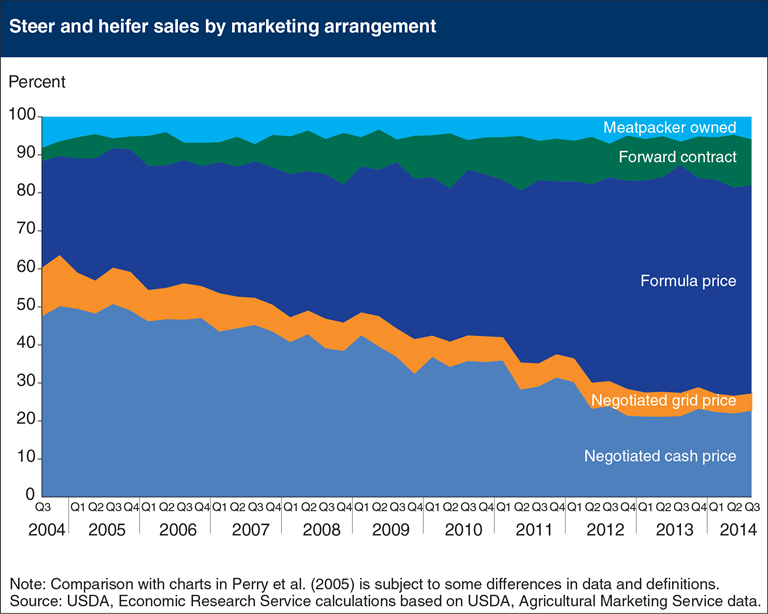 Historically, nearly all livestock were bought and sold in large, public markets where hundreds of buyers and sellers would compete for the best price based on the information that each brings to the market. These cash transactions resulted in prices and pricing information that were freely available and shared widely through public and private sources. Beginning in the mid twentieth century, the industry evolved and became more concentrated and coordinated at all levels. The use of cash markets declined sharply in favor of various forms of price contracts, such as forward contracts, marketing agreements, packer ownership, and formula pricing—where a cash price might be used for reference but premiums or discounts are applied based on a pre-determined formula. In the beef cattle market, the last decade has seen a shift away from cash market sales in favor of formula pricing, which has led to concerns that the cash prices used in those formulas could be unreliable, and that the limited volume of public sales undermines price transparency and market efficiency. The Livestock Mandatory Price Reporting Act was passed in 1999 in response to these and other concerns, and requires all major meatpackers to report the prices they pay for sheep, cattle and hogs, as well as their selling prices for lamb, beef and pork. This chart is from the ERS report, Mandatory Price Reporting, Market Efficiency and Price Discovery in Livestock Markets.