Median income of farm operator households expected to dip in 2015 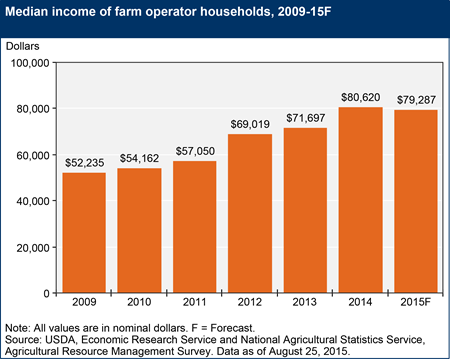 The median total income of farm households has increased steadily over the past 5 years (in both nominal and inflation-adjusted terms), peaking at an estimated $80,620 in 2014. However, it is forecast to decrease slightly in 2015, to $79,287. Households with commercial farms—operations which earn at least $350,000 in gross cash farm income—derive roughly three-fourths of their income from farming. Conversely, off-farm income contributes substantially to the total income of many farm households, especially those with smaller farms or a primary occupation other than farming. Farm households, on average, derive roughly 60 percent of their off-farm income from wages, salaries, and operating other businesses, while the remaining portion comes mostly from interest, dividends, and private and public transfer payments. Farm household median income remains higher than the median income of U.S. households, which was $51,939 in 2013 (the latest figure available). This chart is based on the Farm Household Well-Being Topic Page.