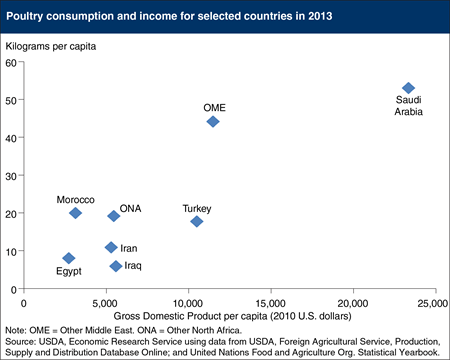 Meat consumption is correlated with income around the world, and the Middle East and North Africa (MENA) region is no exception. While income levels vary widely across the region, income growth continues to outpace the world average with implications for MENA’s future meat demand, particularly poultry. Per capita meat consumption has more than doubled from around 12 kilograms (kg) in the 1990s to about 24 kg in 2010, and USDA’s Baseline Projections suggest this growth will continue well into the future. As with other commodities, the growth of poultry consumption has exceeded gains in domestic production, leading to rising imports, and MENA is now the largest regional importer of poultry products in the world. Domestic meat production is also growing rapidly; regional poultry production grew by nearly 5 percent annually from 2000 to 2011, leading to growth in demand for animal feeds, primarily corn and soybean meal. The chart is from Middle East and North Africa Region: An Important Driver of World Agricultural Trade.