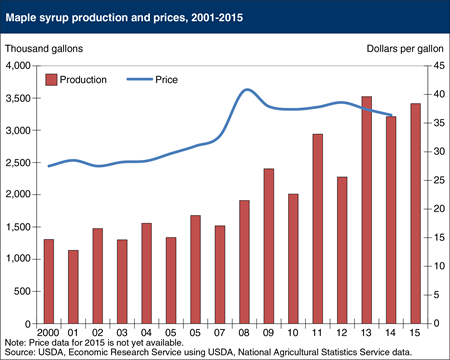 Maple syrup production in the United States was up 203,000 gallons (6.3 percent) in 2015, making it the second largest crop on record. Production of this sweetener has trended higher over the past few decades, and the 3.4 million gallons harvested this year is more than three times the amount produced in 1995. The number of tree taps this year reached almost 12 million, the highest on record, and 61 percent of those taps were in New England. Vermont is the Nation’s largest producer of maple syrup and, with New York and Maine, accounts for 75 percent of the U.S. total. Despite the steady growth in domestic production, imports from Canada still account for nearly 70 percent of U.S. consumption. The average price received by farmers in 2014 was $36.40 per gallon (ranging from $31.50 in Maine to $70.90 in Connecticut), down $1 from the previous year. The wide divergence in average prices is due to sales format—largely retail sales in Connecticut and bulk sales in Maine. This chart is from the July 2015 Sugar and Sweeteners Outlook report.