Corn use by the Middle East and North Africa region is growing, but U.S. import share is declining 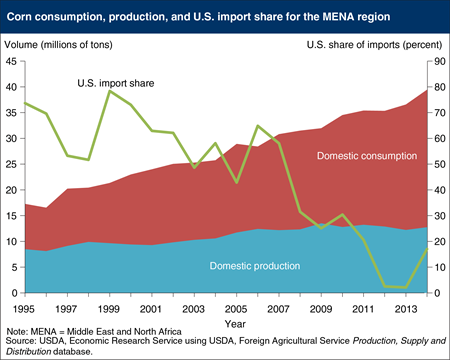 The Middle East and North Africa (MENA) region accounts for a significant and growing portion of worldwide food and feed imports. Expansion of the region’s livestock sector—particularly poultry—has boosted demand for feed, driving steady growth in corn consumption over the past 20 years. Given the disparity between MENA’s limited corn production capacity and its growing demand for livestock feed, corn imports have steadily risen, except for a temporary drop in 2009 associated with the spike in global food prices. The U.S. share of the region’s corn imports has declined from about 70 percent during the mid-1990s to around 10 percent in recent years, the result of reduced U.S. exportable surpluses, higher U.S. prices following the 2012 U.S. drought, and increased competition from other suppliers. Major U.S. competitors in the MENA corn market include Ukraine and Russia, which enjoy transport cost advantages to the MENA region, but can experience frequent weather-induced fluctuations in production. The leading destinations of MENA-bound U.S. corn are Saudi Arabia and Egypt. The chart is from Middle East and North Africa Region: An Important Driver of World Agricultural Trade, AES-88.