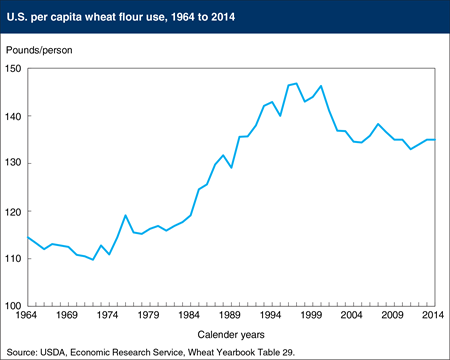 Per capita wheat flour consumption has been relatively stable in recent years, and is estimated in 2014 at 135 pounds per person, unchanged from 2013 but down 3 pounds from the recent peak in 2007. The 2014 estimate is down 11 pounds from the 2000 level when flour use started dropping sharply, partially due to increased consumer interest in low-carbohydrate diets. From the turn of the 20th century until about 1970, U.S. per capita wheat use generally declined, as strenuous physical labor became less common and diets became more diversified. However, from the early 1970s until the late 1990s, wheat consumption trended upward, reflecting growth in the foodservice industry and away-from-home eating, greater use and availability of prepared foods for home consumption, and promotion by industry organizations of the benefits of wheat flour and pasta product consumption. During this time, the domestic wheat market expanded on both rising per capita food use and a growing U.S. population. Relatively stable per capita flour use in more recent years means that expansion of the domestic market for U.S. wheat is largely limited to the growth of the U.S. population. This chart is based on the April 2015 Wheat Outlook report.