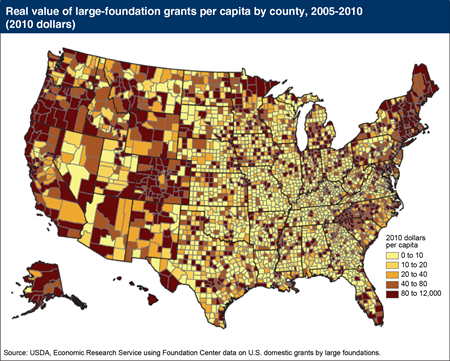 From 2005 to 2010, there was wide variation across both metro and nonmetro counties in the real value of grants per person received from large foundations (based on Foundation Center data on grants by the largest 1,200 to 1,400 foundations). Regionally, the highest levels of grant funding per person were in the Northeast, North and South Carolina, upper Midwest, and West, while much of the Great Plains and South had smaller averages. During 2005-10, 14 percent of counties had no organizations that received grants from large foundations (though these counties may have benefited from grants to organizations based in other locations); 18 percent of nonmetro counties and 6 percent of metro counties had no large-foundation grant recipients. The average real value of grants received per person during this period across all counties (including those without any organizations that received grants) was about $124 per person (in 2010 dollars), averaging about $88 per person in nonmetro counties and $192 per person in metro counties. This map is found in the ERS report, Foundation Grants to Rural Areas From 2005 to 2010: Trends and Patterns, June 2015.