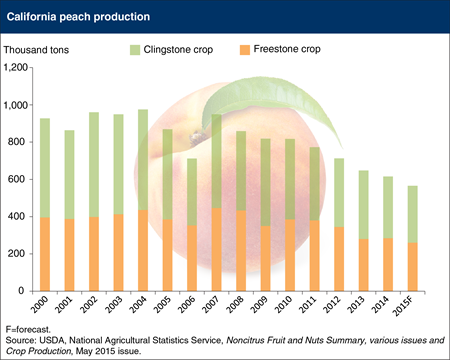 Summer has arrived and California’s 2015 peach harvest is underway. California currently accounts for just over 70 percent of U.S. peach production, making it the nation’s leading producer of peaches, but its production has been trending lower for nearly a decade. The 2015 crop, forecast at 566,000 tons, continues the trend with a decline of 8 percent from the previous year. A warm, dry winter prompted early crop maturity, but also potentially limited the amount of chill hours that fruit trees normally require to produce a full crop. Statewide production of both freestone (mainly for fresh use) and clingstone (entirely for processing) peaches is forecast lower for 2015. Despite the smaller California crop, prices thus far in 2015 are similar to 2014 levels due to supply increases from South Carolina and Georgia, and ample supplies of off-season Chilean imports during the winter. Through the summer, national supplies will continue to grow as production from other States coincides with California’s peak harvest. In the processing market, declining demand for canned peaches (especially with fresh peaches now commonly available most of the year) as well as increased imports have pushed acreage lower, with tree removals over the past year alone reducing California’s 2015 clingstone bearing acreage about 10 percent. This chart is based on the June 2015 Fruit and Tree Nuts Outlook.