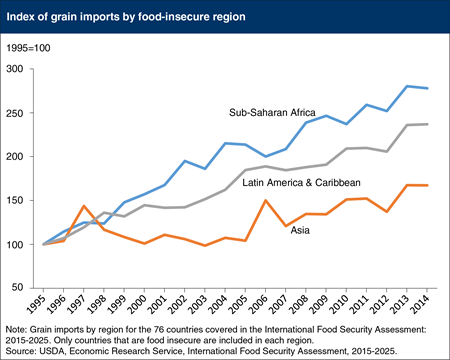 Low- and middle-income countries in Sub-Saharan Africa (SSA) have, as a whole, expanded their grain imports faster than similar countries in other regions. Increasing reliance on imports has improved food supplies, but increased the region’s vulnerability to higher world prices. Food-insecure countries can improve their availability of food either by expanding production, increasing imports, or reducing population growth. ERS analysis found that many countries adopt more than one of these strategies, but that SSA countries have expanded grain imports the fastest, nearly tripling imports since 1995. Low- and middle-income Asian countries, despite their relatively large populations, have shown the least growth in grain trade and have instead focused on improving food security by expanding their own production. Latin American and Caribbean countries have shown increases in both grain imports and local production. Regardless of the strategy adopted, 37 food insecure countries (nearly half of the 76 countries studied) were successful in meeting the goal set in the 1996 World Food Summit of halving their food-insecure populations by 2015. Find this chart and additional information in International Food Security Assessment: 2015-2025.