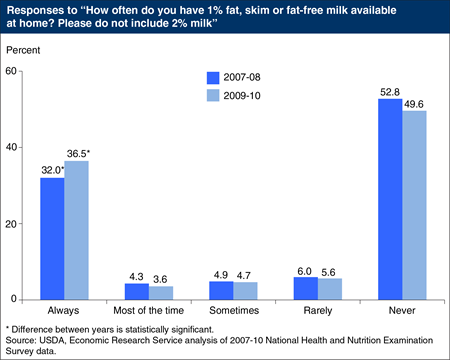 A series of questions in the National Health and Nutrition Examination Survey (NHANES) asks respondents ages 16 and older how often different types of food are kept in their homes in order to get an idea of the at-home food environment in the United States. In 2007-08 and 2009-10, respondents were asked how often they had 1 percent or skim milk available at home, and in both surveys, the most common response was “never,” followed by “always.” However, between the two surveys, the share of people saying that they “always” kept such beverages at home increased by 4.5 percentage points, rising from 32 percent in 2007-08 to 36.5 percent in 2009-10. This increase in Americans reporting that they always have 1 percent or skim milk available at home is a positive nutrition trend, as Americans aged 2 years and older are advised to consume lower-fat milk (skim or 1 percent) as opposed to whole or 2 percent milk. This chart appears in “National Surveys Reveal Modest Improvement in the Types of Foods Available in Americans’ Homes” in the April 2015 issue of ERS’s Amber Waves magazine.