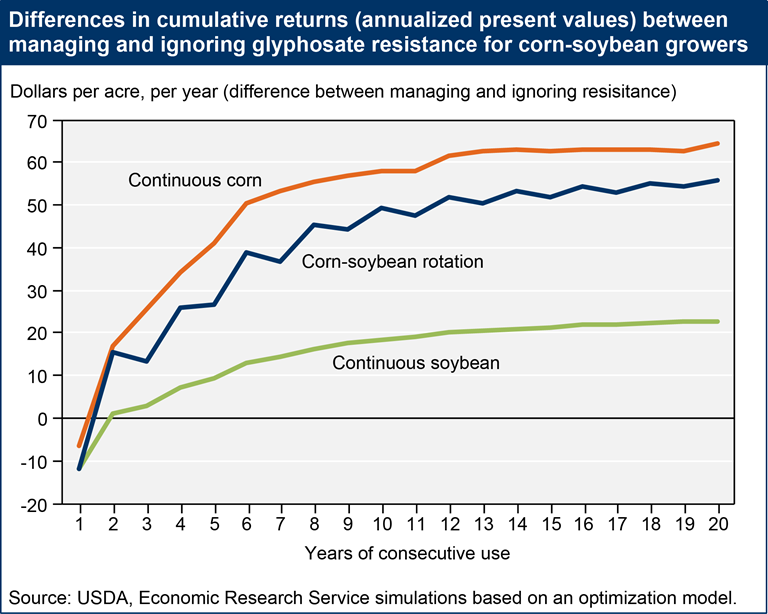 Glyphosate—known by many trade names, including Roundup—has been the most widely used herbicide in the United States since 2001. Crop producers can spray entire fields planted with genetically engineered, glyphosate-tolerant (GT) seed varieties, killing the weeds but not the crops. However, widespread use of glyphosate in isolation can select for glyphosate resistance by controlling susceptible weeds while allowing more resistant weeds to survive, which can then propagate and spread. ERS analyses show that weed control strategies (over 20 years) that manage glyphosate resistance differ from those that ignore glyphosate resistance by using glyphosate during fewer years, by often combining glyphosate with one or more alternative herbicides, and by not applying glyphosate during consecutive growing seasons. Initiating resistance management reduces returns compared to ignoring resistance in the first year, but increases them in subsequent years, as the value of crop yield gains outweighs increases in weed management cost. After two consecutive years of resistance management, the cumulative impact of growers’ returns from continuous corn cultivation, corn-soybean rotation, or continuous soybean cultivation exceeds that received when resistance is ignored. This chart is found in the Amber Waves feature, “Managing Glyphosate Resistance May Sustain Its Efficacy and Increase Long-Term Returns to Corn and Soybean Production,” May 2015.