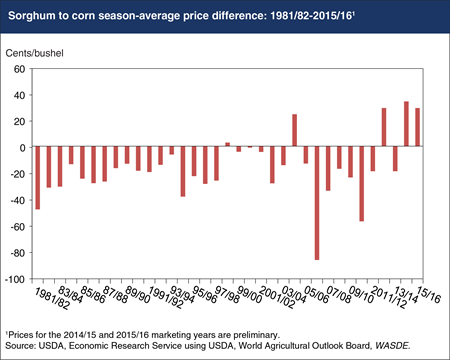 In recent years, the price of sorghum has been supported by unusually strong export demand, particularly from China. Sorghum is a common substitute for corn in feed rations and is also used for ethanol production in the United States. In most countries, corn tends to be preferred over sorghum for livestock feed, so sorghum typically sells at a discount to corn in global markets. However, since sorghum does not face import quotas and other constraints that often delay or restrict shipments of corn and distillers dried grains (DDGS) from entering the country, China’s demand for U.S. sorghum has surged. Imports by China were negligible prior to 2013, but it is now the principal buyer of U.S. sorghum and is expected to account for more than 90% of the 350 million bushels of sorghum the United States is forecast to export in the 2014/15 marketing year. The strong increase in demand has pushed U.S. sorghum prices higher, resulting in a premium over corn that is expected to persist for the second consecutive marketing year. While not without precedent, the season average price of sorghum has exceeded the price of corn only in 4 previous marketing years since 1981/82, and only 18 times in the 96-year history of sorghum price reporting. This chart is based on the ERS report, Feed Outlook: May 2015,.