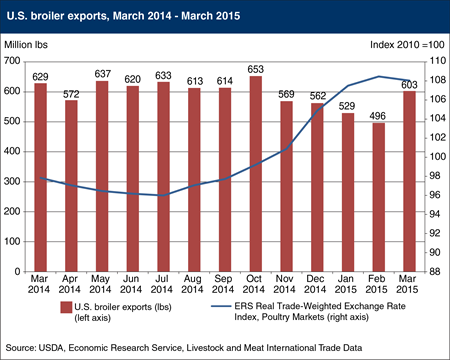 Broiler shipments were down 4.1 percent in March 2015 from a year ago. The 603 million pounds shipped was higher than had been expected, given Highly Pathogenic Avian Influenza (HPAI) related national and regionalized trade bans and a stronger dollar. Exports declined in January and February by 12.4 and 17 percent from a year ago, respectively, due to national bans imposed by China, South Korea, and Russia and regionalized bans imposed by a majority of trading partners; however, declining prices, particularly for leg quarters, led to greater shipments into other markets as low prices offset the impact of a stronger currency. The largest gains in shipments were to Asian markets including Taiwan (up 186 percent), Hong Kong (up 58 percent), and Vietnam (up 115 percent). Shipments also increased to Mexico and Canada. For all of 2014, U.S. broiler exports reached 7.304 billion pounds, and USDA currently forecasts 2015 exports of 6.680 billion pounds, down 7.2 percent from 2014, reflecting the bans in place by Russia, South Korea, and China, as well as the continuing strength of the U.S. dollar. This chart is from the May 2015 edition of the Livestock, Dairy and Poultry Report.