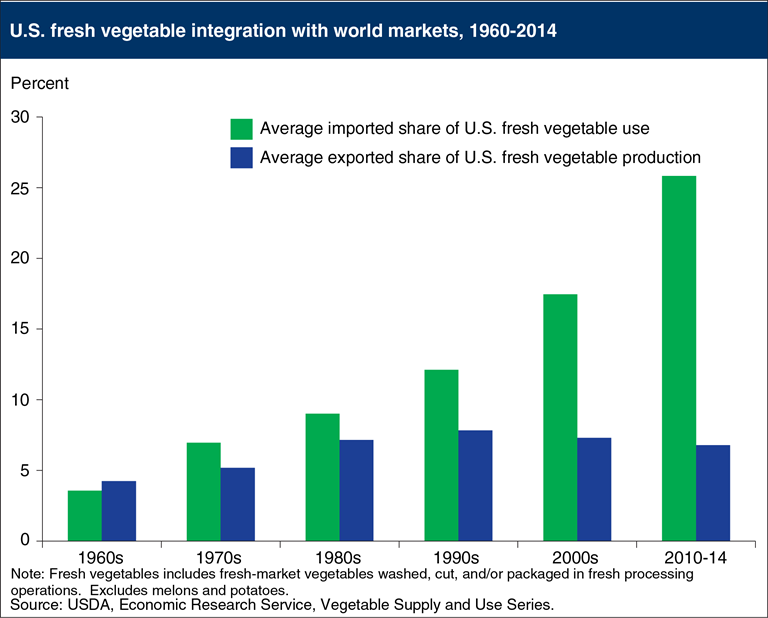 U.S. production of fresh vegetables has grown over the past several decades, but domestic consumption has grown even faster, reflecting an expanding population and higher per capita use. The United States has been a net importer of fresh vegetables since 1969 (with the exception of 1981), and the rate of increase of the share of imports grew notably after 1990. Since 2010, approximately 25 percent of the fresh vegetable supply utilized in the United States has been imported each year. The value of fresh vegetable imports exceeded exports by almost $4.3 billion in 2014. The share of imports in domestic use continues to grow in response to multiple factors, including supply gaps, increased awareness of vegetables as a part of healthy diets, desire for year-round variety of fresh vegetables, and increased demand for new products. Exports have remained a relatively small share of U.S. fresh vegetable production. Average volume exported as a share of production peaked in the 1990s and the share exported to all countries fell approximately 3 percent in 2014 compared to the previous year. Onions and lettuce continue to dominate fresh vegetable exports. This chart is based on the Vegetables and Pulses Outlook: May 2015.