Cotton production in California expected to decline due to drought 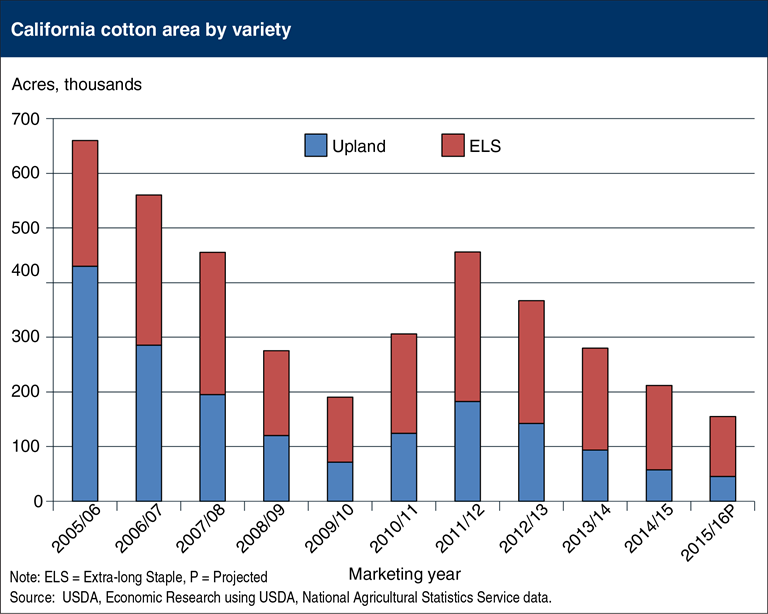 California is the fourth largest cotton producing state, and production there depends heavily on irrigation. California is the dominant producer of the longer and finer quality “Extra-long Staple” (ELS) fiber that is used in high-value products such as sewing thread and more expensive apparel and home furnishing items. During the past three years, California production accounted for 95 percent of the total ELS cotton in the United States. The on-going drought that began in 2012 remains a major concern for agricultural producers as reservoir levels and water supplies have been reduced significantly; record-low water allocations were seen in 2014, affecting the type and amount of crops some farmers can produce. While acreage planted to upland and ELS varieties varies from year to year, the lingering drought in California is expected to limit acreage once again in 2015. USDA’s Prospective Plantings report released at the end of March indicated a 27-percent decrease in the State’s total cotton area for 2015, with ELS area declining 29 percent and upland area decreasing 21 percent. While California’s total cotton area would be at its lowest since 1932, the decline is similar to the one experienced during the previous statewide drought of 2007-09. This chart is based on information in Cotton and Wool Outlook: April 2015.