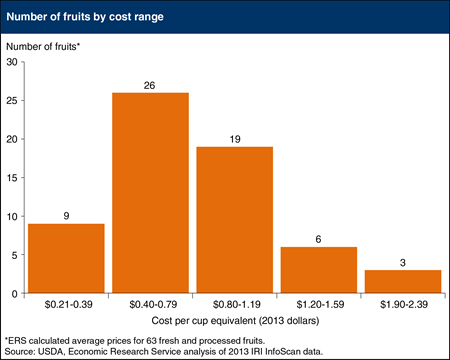 Food intake surveys find Americans consuming about half the amount of recommended fruits per day. One reason may be that some consumers perceive fruit to be expensive. ERS calculated average prices paid in 2013 for 63 fresh and processed fruits measured in cup equivalents. A cup equivalent is the edible portion that will generally fit in a 1-cup measuring cup; 1/2 cup for raisins and other dried fruits. The amount of fruit a person should eat per day depends on age, gender, and level of activity. For a 2,000-calorie diet, 2 cup equivalents of fruits per day is recommended. Fresh watermelon at 21 cents per cup equivalent and apple juice (made from concentrate) at 27 cents were the lowest priced fruits, while fresh blackberries, fresh raspberries, and canned cherries were the priciest. Thirty-five fruits cost less than 80 cents per cup equivalent. The data in this chart are from ERS's Fruit and Vegetable Prices data product on the ERS website, updated March 19, 2015.